I love the great quality flexfit hats they use, I love the subtle but powerful emblem, and the service was great! 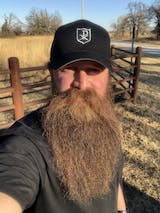 The Chi Rho is a Christian symbol for “Christ” written by superimposing the two Greek letters “Chi (X)” and “Rho (P)” which are the first two letters in Greek of the name of “CHRist.”